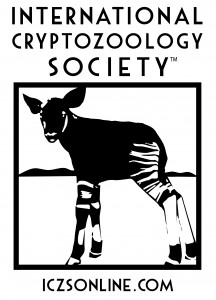 Welcome to the International Cryptozoology Society

It is my pleasure to welcome you as a fellow member of the International Cryptozoology Society (ICS).  As a Society member, you will share in the thrill of the search for hidden animals, and thanks to the Society’s international contacts hear about the latest expeditions and discoveries worldwide.

As a founder, member, director and enthusiastic supporter of the now-defunct International Society of Cryptozoology (ISC), I participated in many of its symposia and contributed to its publications from 1982 through 1997. The ISC dissolved shortly afterwards, but my and others’ interest in cryptozoology and the search for hidden animals has continued to fascinate naturalists and the general public, and even some adventurous scientists for the continuing decades.

Although not a legal successor of the ISC, the ICS follows in its footsteps and fosters a scientific approach to the search for unknown animals, based on evidence and modern science.   It will publish a peer-reviewed journal and hold annual symposia, as well as host special events and coordinate online channels to share announcements of new species discoveries and ongoing quests.

I hope you will find the opportunity to attend the Society’s annual conference and enjoy reading and perhaps also contribute to its publications.

With my best regards,

The formal announcement of the ICS and introduction of the first honorary President, Dr. Paul LeBlond, occurred on the last day of the conference, January 6, 2016. The work of the day-to-day functioning of the ICS and the ICM, under the overview of the ICM Board of Directors, is conducted by Loren Coleman, Director, and Jeff Meuse, Assistant Director. 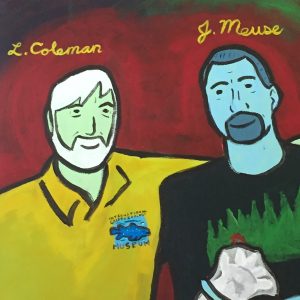 The International Society of Cryptozoology (ISC) was founded in 1982 at a special meeting hosted by the Department of Vertebrate Zoology of the U.S. National Museum of Natural History, Smithsonian Institution, Washington, D.C. That Society vanished, in essence, with the death of Bernard Heuvelmans, Richard Greenwell, and Ray Mackal. It is the objective of the International Cryptozoology Society, tied to a permanent physical presence, to have a legacy not linked to individual leadership, but to the cryptozoological goals of the Museum, the Society, and the journal.

In November 2007, I\we shared and launched the Austin artist Duncan Hopkins-designed logo for the International Cryptozoology Museum of a coelacanth (first “discovered” in 1938) that successfully identified and branded the new museum.

The coelacanth worked, but the significance of the okapi remains important to cryptozoology. The okapi used as the International Society of Cryptozoology’s official logo on their journal Cryptozoology, as well as the ISC Newsletter.

The okapi has remained a visible and useful image in the field. Here an Italian organization founded in the late 1980s decided to employ an okapi looking in a different direction for their logo. The okapi and cryptozoology will always be symbolically united in the public’s eyes.

We decided to use as the foundation for the ICS logo the image we have of the very first living okapi known to Western Civilization. A small, month-old okapi was captured in 1907, and its photograph was published in London. This model seemed the perfect okapi to be the symbol of the new International Cryptozoology Society. 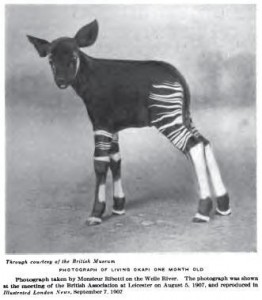 This entry was posted in Home Page. Bookmark the permalink.